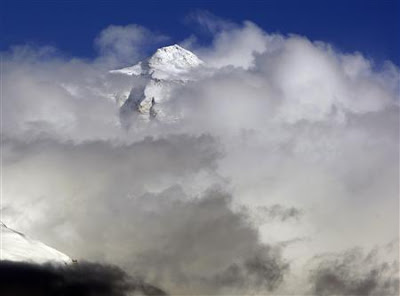 As an ex rock and ice climber, I am pleased to learn that the Olympic Torch team safely reached the roof of the world on Thursday. Summiting Mount Everest is no small feat even on a good day. Climbers have to be technically competent and in top shape in order to survive the oxygen-thin dead zone above 8000 metres and to complete the descent as well. In addition to weather, other factors such as acclimatization, body-mass depletion, logistics, equipment etc, are all part of the Russian roulette game of high altitude climbing. There are few "sports" that claim the life of one out of every ten players who willingly tie their lives onto the sharp end of the rope, so to speak.

So, why does anyone in his/her right mind would want to put him/herself in such risky situations? Why do people climb mountains? Is it a philosophical directive - as Mallory's famous response said "Because it is there!", or is it because climbers have rocks in their heads (pun intended) ??!!

For me (I have never climbed Everest and will never do in this life time), the call of nature is always there. There is something to be said about responding to a primal urge to merge and be part of nature, even if it means death (not that I am looking for it). This natural instinct (along with raising children and/or pets and turning your garden back into a forest), coupled with the challenges of pushing one's technical, physical and mental limits to survive in adverse conditions, provide the imperative to train for and to participate in such a dangerous sport.

Without making it sounds like I am advocating for the devil, I would like to point out the fine difference between the increasingly popular ultimate adventures (as seen in reality TV) and the sport of rock/ice climbing in mountains. In the former, participants are usually asked to carry out certain activities in an urban or a wilderness journey but they always have some levels of external monitoring and support, including evacuation and rescues. However, in mountaineering (with the exception of high profile expeditions such as the Olympic torch up Everest), you are pretty well on your own. Having accepted the "subjective danger" of participating in a risky sport, you will now be at the mercy of "objective dangers" which might include avalanche, slides, blizzards, hand-holds coming loose, falling rocks, and other uncontrollable risks. You survival depends very much on your assessment and management of these risks, including the decision to turn back. Even with the advance of communication technologies, such as satellite phone (regular wireless devices do not work deep in the mountain), it will still take time for rescuers to mobilize, locate, reach, and extract mountaineering victims from remote locations. For example, one of my colleagues fell while climbing Mount Temple and it took his partner almost two days to climb out to get help. By the time rescuers arrived, he had already died of exposure.

So, it is from the perspective of an ex-climber that I feel happy about the success of the Olympic torch team and the feat of achieving the goal of reaching the summit without any loss of life.
Posted by Haricot 微豆 at 12:29:00

There's a book about a very high profile summit of Mount Everest with 6 people died. The author tells the story about how people see attaining a goal so much that they lost sense of rationality. In the end, they see reaching the top more important than their lives, which in fact, what's most important is being able to come back safely, with or without reaching the top.

Ruth: The lack of oxygen to the brains would have affected people's decision-making capabilities, thus contributing to their ultimate demises.