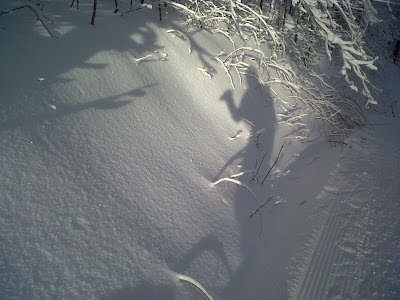 I took this photo on Jan 14, 2012 on a cross-country ski trail in the Gatineau Park on the Quebec side of the Ottawa River. It was a cold day with the mercury hovering at abt minus 17 deg C and my fingers were freezing while I was fiddling with the camera without my gloves on

As a winter sport enthusiast, I have done exercise in temp much colder than -17C. During the winter trip to the hunting ground of our Cree Indian host near Moose Factory, I was x-country skiing all week in near minus 40 deg C weather.

But I have to admit human bodies thrive better in warmer temperature, and even the toughest hard-core skiers do not object to celebrating the end of Winter. Indeed many skiers feel they are entitled to some nice spring skiing on sugar-lump snow, having endured the "hardship" of a long Canadian winter many times over on wind-whipped ski hills !!!

And so on this cool Feb 29, 2012 leap-year day, let me say how happy I am to know that winter is coming to an end and that spring is just around the corner !!!

Mapping service brought to you by Mapit

All entrants who completed the 2011 Comrades Marathon may use this as their qualifying race and will be seeded according to their finish time.

The Ironman seeding table is as follows:-

Medals will be awarded to all official finishers who complete the full distance within the 12-hour cut-off.

Arguably the greatest ultra marathon in the world where athletes come from all over the world to combine muscle and sinew and mental strength to conquer the approx 90 kilometres between the cities of Pietermaritzburg and Durban, the event owes its beginnings to the vision of one man, World War I veteran Vic Clapham.

Vic Clapham was born in London on 16 November 1886 and emigrated as a youth to the Cape Colony in South Africa, with his parents. At the outbreak of the South African War (Anglo-Boer War 1899-1902) he enrolled as an ambulance man into the Cradock Town Guard at the age of 13. He later moved to Natal and worked as an engine driver with the South African Railways.

With the outbreak of the Great War 1914-1918, Vic Clapham signed up with the 8th South African Infantry, and fought and marched 1700 miles of the eastern savannahs of Africa in pursuit of Glen Paul Von Lettow-Vorbecks askari battalions.

The pain, agonies, death and hardships of his comrades which he witnessed during those awful days left a lasting impression on the battle-hardened soldier, especially the camaraderie engendered among the men in overcoming these privations. Thus when peace was declared in 1918, Clapham felt that all those who had fallen in this catastrophic war should be remembered and honoured in a unique way, where an individuals physical frailties could be put to the test and overcome. Remembering the searing heat and thirst of the parched veld through which he had campaigned, he settled on the idea of a marathon and he approached the athletic authorities of the day to sound their views. His enquiry led him to the doors of the League of Comrades of the Great War a corpus of ex-soldiers who had formed an association to foster the interests of their living companions who had survived the War.

Clapham asked for permission to stage a 56 mile race between Pietermaritzburg and Durban under the name of the Comrades Marathon and for it to become a living memorial to the spirit of the soldiers of the Great War This was strenuously resisted by the League, but Clapham persisted maintaining that if a sedentary living person could be taken off the street given a rifle and 60lb pack and marched all over Africa then surely a fit and able athlete could complete the distance. Applications in 1919 and 1920 were refused but in 1921 the League relented and gave permission and 1 for expenses, which was refundable.

The first Comrades Marathon took place on 24th May 1921, Empire Day, starting outside the City Hall in Pietermaritzburg with 34 runners. It has continued since then every year with the exception of the war years 1941-1945, with the direction alternating each year between Pietermaritzburg and Durban, the so called up & down runs.

The Comrades Marathon is a cherished national treasure and attracts thousands of runners, spectators and television viewers every year. We invite you to participate in this great event and experience the worlds greatest race.

(Disclaimer: All the above information are extracted from: http://www.comrades.com/ at time of posting. Readers are advised to contact the organizers of the Comrades Marathon in South Africa for more up-to-date and accurate text, figures, tables and data. This authour shall not be held responsible for any liabilities resulting from the use of information contained in this blog.)