Existentialism is not an easy subject to digest. I would put "A Pigeon Sat on a Branch" in the same category as Samuel Beckett's "Waiting for Goddard". I am not too crazy abt it because my rational mind keeps on looking for a storyline when there is none.

Au contraire, I love Brad Pitt's "The Tree of Life" as well as Harrison Ford's "Blade Runner" (loosely based on the book "Do Androids Dream of Electric Sheep?") because I can relate to the characters and follow the storylines of both movies.

But that's not to say I am not charmed by the Swedish film's segmented presentations and the faint veins that link them together.

Notwithstanding my preference for "realism" (whatever that means in the context of existentialism), there are still some scenes that resonate with me and I can't help but laugh at the absurdities of our everyday routine life.

For example: The bus-stop scene in which a guy said: "You gotta know today is Wednesday; because Wednesday follows Tuesday, and Thursday follows Wednesday, etc. Without that order, everything is chaos."

Perhaps that is my problem. I haven't been wearing a watch for over six months now.

1. Wikipedia:
" ..... A Pigeon Sat on a Branch Reflecting on Existence (Swedish: En duva satt på en gren och funderade på tillvaron) is a 2014 Swedish comedy-drama film directed by Roy Andersson. It is the third part in his "living"-trilogy, following Songs from the Second Floor and You, the Living.
It premiered at the 71st Venice International Film Festival where it was awarded the Golden Lion for Best Film. It was selected as the Swedish entry for the Best Foreign Language Film at the 88th Academy Awards. ....."

(Photo and text from PBS)

As they set sail from London to the distant shores of America in December 1606, the men and boys onboard the Susan Constant, the Godspeed, and the Discovery surely expected the best from their adventure. They’d establish a British settlement, find gold and silver, a passage to the Orient, and, perhaps, the lost colony of Roanoke. The explorers, funded by a group of London entrepreneurs called the Virginia Company, could not have anticipated the fate that actually awaited most of them: drought, hunger, illness, and death.
Their journey started off as badly as it ended. The three ships were stranded for weeks off the British coast, and food supplies dwindled. Over the course of the voyage, dozens died. But 104 colonists — many gentlemen of privilege, but also artisans, craftsmen, and laborers — survived to reach the shores of Virginia. On May 13, 1607, they decided to make landfall on the swampy ground of what was then a peninsula (and now an island) along the James River, some 60 miles from the mouth of the Chesapeake Bay. Within a month the settlers had constructed a triangle-shaped wooden fort, for protection against the Spanish, who did not want the British to establish any kind of foothold in the New World.
The settlers of the new colony — named Jamestown — were immediately besieged by attacks from Algonquian natives, rampant disease, and internal political strife. In their first winter, more than half of the colonists perished from famine and illness. Eventually, more colonists and new supplies were brought from Britain, and, despite a fire that wiped out the original fort, the settlement found some stability under the leadership of Captain John Smith. Smith, with the help of Pocohontas, daughter of the Algonquian chief Powhatan, managed to broker an uneasy peace with the natives before leaving the colony and returning to England in September 1609.
The following winter, disaster once again struck Jamestown. Only 60 of 500 colonists survived the period, now known as “the starving time.” Historians have never determined exactly why so many perished, although disease, famine (spurred by the worst drought in 800 years, as climate records indicate), and Indian attacks took their toll. On June 7, 1610, Jamestown’s residents abandoned the hapless town, but the next day their ships were met by a convoy led by the new governor of Virginia, Thomas West, Lord De La Ware, who ordered the settlers back to the colony.
In 1612, John Rolfe — who would later marry Pocohontas — began to grow tobacco, finally giving the colony a cash crop and hope for survival. The first representative government in the New World was convened in Jamestown in July 1619, the same year that African slaves — then indentured servants — were first brought to America. Jamestown was the capital of Virginia until 1698, when its statehouse burned down. The following year, the capital moved to Williamsburg, and Jamestown began its slow decay ....
Source:
* Text from PBS: http://www.pbs.org/…/secre…/death-jamestown-background/1428/
* Video: WPBS TV program: www.PBS.org The American Experience series)

Btwn 1630-1651, William Bradford led the pilgrims at Plymouth in an attempt to build a spiritual community in New England where they would live in peace and flourish. But when the Mayflower sailed away, they were left on their own.

Facing the harsh weather, raiding pirates, Indian attacks, dwindling food, fatal diseases, and other misfortunes, many perished and the remaining population barely survived. But a strategic alliance with some of the natives enable them to learn new skills and knowledge to live off the land and fight off hostile tribes.

Unfortunately with the arrival of new colonists at Plymouth and the establishment of new colonies along the eastern seaboard, starvation, conflicts and raids eventually took a strong toll on the relationship btwn the white men and the natives. By the time the Indians tried to eradicate the colonists off their ancestral land, it was already too late. The colonization of North America was unstoppable.

Williams Bradford's dream of a spiritual community and peaceful co-existence with their Indian neighbours did not materialize in his life time. Ironically, it was the survival news of the Plymouth pilgrims that opened the food-gate to the New World.

So without present day political bias, let's take a minute to absorb the story of the pilgrims and reflect on the meaning of Thanksgiving on Nov 26, 2015.

Attachment: A page from William Bradford's hand-written journal that had been lost for over 100 years, then was found in London, and eventually returned back to Boston. 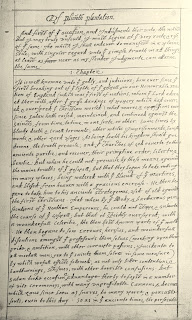 Someone representing the Canadian Police Association (CPA) called and asked whether I would like to support their anti-bullying campaign.

The CPA caller was polite and not pushy, but I couldn't take the chance. "Sorry I don't accept phone solicitation." I said. He thanked me and hung up.

Back in June, the Ottawa Police put out a scam alert but then had to quickly withdraw it because the Police Association of Ontario (PAO) was actually campaigning. False alarm and communications, they said.

But with so many scammers out there, the best is to quickly disengage and to make direct donations to the charities of your choice under your own terms and conditions.