I will be doing some cross-country skiing and winter camping in the James Bay area (northern Ontario) for a week. It will be my first overnight winter trip since I went skiing up Mount Marcy in New York State many years ago. At the time, I only had a 3-season sleeping bag and spent all night shivering. For this trip, I will bring a hybrid bag filled with goose-down (feather) and synthetic materials that is good to minus 20 degrees C. The forecast says the weather in northern Ontario will be bitterly cold, in the minus 30 to 40 degrees range. I will most likely use a bivy sac (outer shell) and wear my downfilled jacket to bed to make up for the 10 to 20 degrees gap.

On a different subject, I have been so busy lately that I have not answered comments left in my blog articles. I did read them and will get around to responding. I still think the earth is spinning faster in 2008 than in 2007. Cheers !!!
Posted by Haricot 微豆 at 12:05:00 14 comments: Links to this post

黃潤娥的故事: 留言 / The Story of Anita Wong: A Note from the Past

在【中庸:小戴禮記】那一頁,妳用鉛筆在『君子之道費而隱』旁邊,輕輕的寫了<星期四默書>,我相信妳在寫下那句的時候,老師是要下課了,班房內的同學和妳都在嘻笑喧嘩,忙著凖備下一堂的書本,或許在那一剎那間,正如數以千百計的香港中學生,妳記得念書丶默書,都是我們莘莘學子的職責,妳不想忘記要凖備那星期四的功課,妳寫的時候,妳還不知道我的存在,不知道數年之後,我倆会在加拿大相遇,而妳也不会知道,就在妳寫下那簡單的<星期四默書>的時候,妳的病正在妳的胸口蔓延,在那嘻笑聲中,妳簡單的幾個鉛筆字,竟成了妳給我的留言。
Posted by Haricot 微豆 at 11:20:00 8 comments: Links to this post

The photos below were taken around the West Hill House Bed and Breakfast place, the Sugar Bush Ski Resort, and also on top of the ski lifts at Mad River Glen.

#1: The famous "single" chair lift that goes to the top of Stark's Nest at Mad River Glen (MRG). 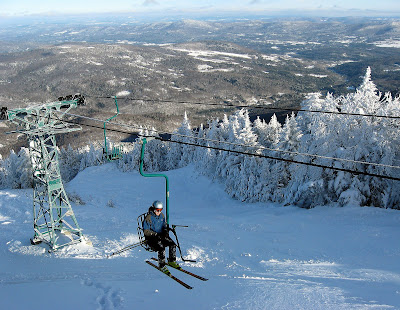 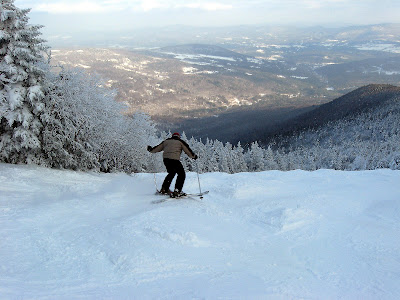 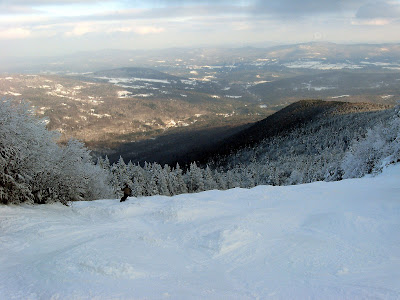 #4: The picture below shows the black-diamond (difficult) run next to the chair lift. Tree-huggers can ski in the glades on the right of the lone dead tree. 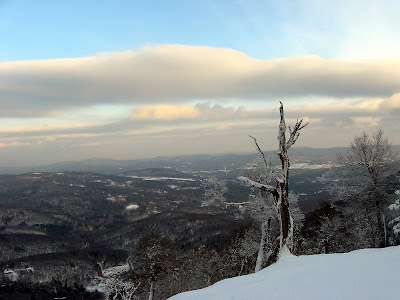 #5: One of my favourite black-diamond run - "Catamount Bowl". Love the powder moguls !! 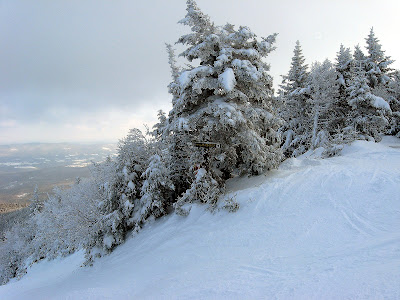 #6: On top of the "Warming Hut" at Mad River Glen, looking toward Lake Champlain and further north, Canada. The evergreen trees were completely covered with powder snow !! 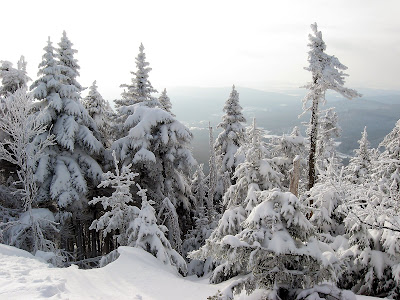 #7: Snowshoeing in the golf course, near the West Hill House Bed and Breakfast place. 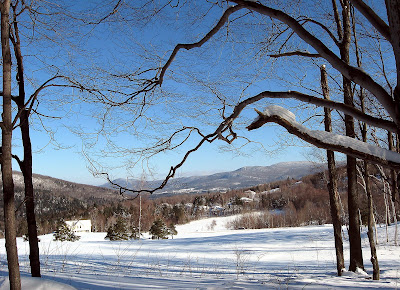 #8: On my cross-country skis, looking at the Sugar Bush Ski Resort where I tried snowboarding, for very the first time. 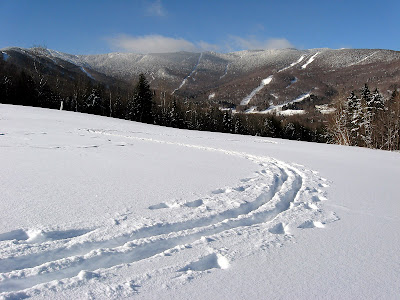 #9: At the top of the hill, looking at my "herring bone" marks in the deep snow. 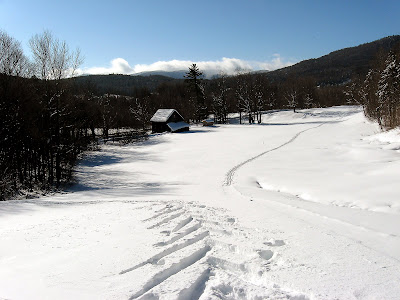 #10: The shadows of tall trees cast by the winter sun. 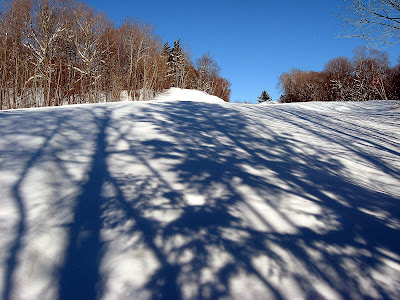 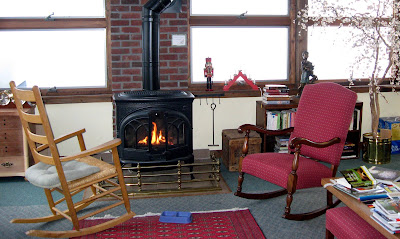 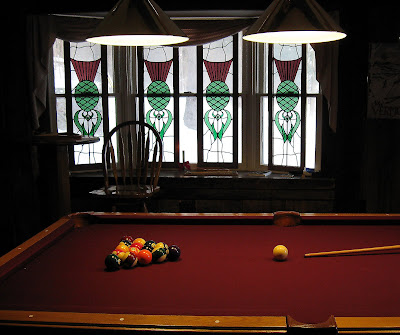 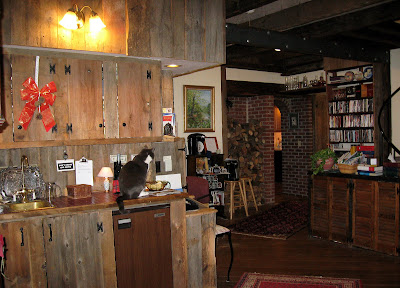 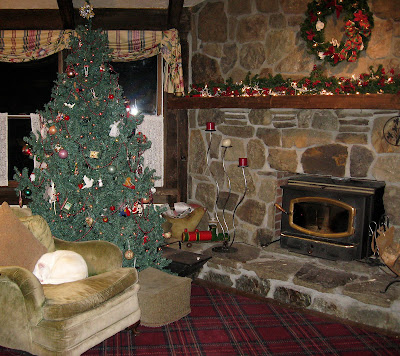 I am back and will start responding to your comments posted on my blog since December 25th. I will also sort out the photos I took in Vermont and post them on the blog.

It's late at night and I am taking a quiet moment in the inn keeper's library reflecting on what happened between New Year's Eve and today.

The end of the year 2007 was celebrated with a nice supper cooked by the inn keepers. The home-cooked meal consisted of: oven-baked ham, curried chicken, scalloped potato, and other nice foods that were served with red wine. After supper, the guests played some non-competitive snookers, followed by a few games of scrabbles. At around quarter to midnight, the big TV screen was turned on and we watched the crowd scene at Times Square in downtown Manhattan. As the inn's grand-father clock struck twelve, we broke out into the traditional song Auld Lang Syne written by Robert Burns in 1788.

On New Year's day, the weather outside looked nice and I went snowshoeing in the field behind the barn. Snow flakes were falling from the sky all day long and the ski trail I had made previously was almost completely covered with new snow. Unlike yesterday, the wind was not blowing hard which made the trip pleasant and relaxing. The rest of the day was spent lounging around in the 6,000 square feet farm-house that had been turned into a bed-and-breakfast inn.

I woke up at 4:30 am before sunrise the next morning, contemplating a hike up one of the two 4,000-ft peaks. However, given that everyone had stayed up late last night, I decided it would not be a good idea to wake people up. By the time I got out of bed at 8 am, the temperature outside had already dropped to about 10 degrees F with a 10 mph wind  (taking into account the wind-chilling factor, it felt like 1 deg F). If I had gone out, I would have been caught in the blowing snow on the mountain slope.

However, being the restless type, I was not content to sit around reading books while the powder snow on the ski hill was calling. So, at 11 am, I drove to Mad River Glen and spent the next five hours skiing up and down the mountain. Despite the chilly weather, I must say I enjoyed skiing on many of the blue (intermediate) and black diamond (difficult) runs. The powder snow and the beautiful winter scenery more than made up for the cold temperature. Upon my return to the inn, I was treated to a cup of hot cocoa and some short-bread cookies made by our hostess.

I have taken quite a few photos on top of the mountain but since I am currently using the inn keeper's Apple computer, I have not been able to post them on my blog right-a-way. As mentioned perviously, I will respond to your comments (which I read) upon my return to Canada.