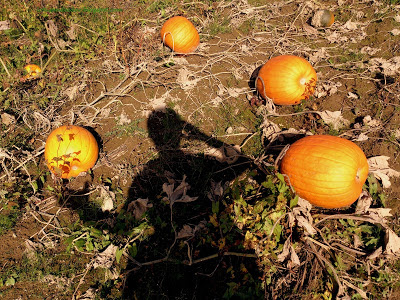 ＋＋＋＋＋＋＋＋＋＋＋＋＋
Posted by Haricot 微豆 at 23:59:00 2 comments: Links to this post 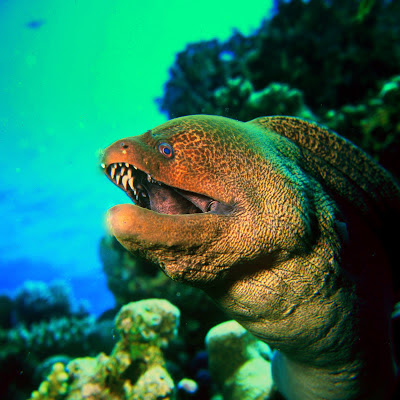 K and I are back from the French Polynesia on Sunday. But part of me is still in the South Pacific.

Within the first 5 minutes of my first swim in the lagoon of the Fakarava atoll (our very 1st trip off the the cargo-passenger ship Aranui 3), an eel came out from its hole and bit my left little finger to the bone. I was flown back to Tahiti to undergo surgery to have the severed muscles, nerves and tendons reattached. After 4 days of "vacationing" in the Taaone Hospital, I flew north to Hiva Oa, one of the Marquesas islands, and rejoined K and the rest of the tour group on-board.

Needless to say, I had to stay out of the water for the rest of the sea voyage. But that did not lessen my enjoyment and appreciation of the natural beauty of the place and people. I can see why the mutineers of the Bounty chose to go native. Presently, some of their descendants (at least for those mutineers that weren't later caught and hanged by the Royal Navy) are still living on the islands !!! But then I digress.

This morning, I went to the clinic and the doctor took the stitches out. With the cast off, my pinky and the rest of my hand are undergoing physiotherapy. There is a 50+ chance that the nerves and tendons will regenerate.

The South Pacific is paradise for us city folks. K is already talking abt going back and part of me is still out there some where. Meanwhile, I hope the eels in the French Polynesia have not developed a taste for finger food :O

Labels: 旅遊南太平洋大溪地及其它法屬波利尼西亞島嶼 Travel to Tahiti and other Polynésie française Islands in the South Pacific Ocean 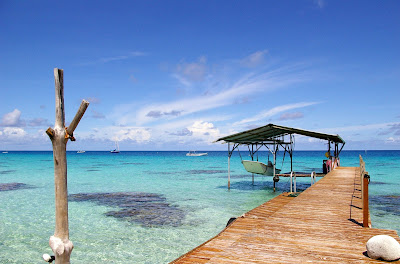 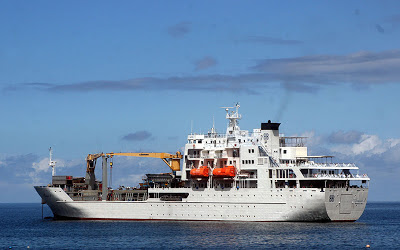 Arrived back from vacation at abt 2 am ... with part of me left behind as finger food for an eel off the shore of Fakarava Island, Polynésie française !!!

The ship I took was the Aranui 3.

M/V Aranui 3 is a mixed passenger/cargo vessel operating between Tahiti and the Marquesas. With a homeport of Papeete, French Polynesia, Aranui 3 is registered as a passenger ship under the International Convention for the Safety of Life at Sea (SOLAS), for international operation. She was built in Romania and entered service in 2003.

Apart from supplying cargo to the six ports in the Marquesas, Aranui 3 also operates a passenger service and tourist cruise as part of its multi-weeks itinerary. It also stops at the islands of Rangiroa and Fakarava in the Tuamotu Islands.

Labels: 旅遊南太平洋大溪地及其它法屬波利尼西亞島嶼 Travel to Tahiti and other Polynésie française Islands in the South Pacific Ocean This semi-private event  «營火 * 美酒 * 星光歌劇院» was organized and hosted by Mr. D Kai Ma 馬稚凱, Musical Director of Canada's Pellegrini Opera, in the backyard of his own home in Chelsea, Quebec.

I attended the event because I always wanted to support the Ottawa Pellegrini Opera. Beside, the description of the "Opera Under The Stars" event was so poetic:

During the supper gathering in La Vallée Motel Restaurant in Chelsea, Mr. Ma personally thanked Maria Pellegrini and other organisers, volunteers, and supporters for their hard work.

The crowd then walked across Highway 105 to Mr. Kai Ma's property where a piano and other equipment had been set up on a well-lit backyard stage. Lucky for both the audience and performers, the weather remained dry and we all enjoyed a good night of great classical music under the starry clouds :O


D. Kai Ma began his musical performance in piano and voice at the age of 11. Besides opera and concert performances, he served as choral master of the Taipei Capital Opera Company and hosted 2 classical music radio programs. He began singing countertenor in 2000. He has performed and toured as a soloist with several major music ensembles in Taiwan and Canada. He currently serves as music director for Pellegrini Opera in Ottawa, Canada.   馬稚凱是位全方位的古典音樂工作者，一九九六年起以男高音活躍於台灣古典音樂界，二ＯＯＯ年後轉攻假聲男高音，二ＯＯ三年移居加拿大後，即受到當地古樂團的延攬並從事職業演出，經常透過加拿大廣播網CBC古典頻道播送。除了演唱活動，亦長期研習歌劇指揮法，二Ｏ一二年通過甄選並開始擔任加拿大Pellegrini Opera歌劇團的音樂總監。

Specializing in the Puccini repertoire, she has appeared with the Edmonton, Manitoba, Quebec, Southern Alberta (Calgary), and Vancouver operas and Opera Hamilton, and has sung in Genoa, Trieste, Parma, and Catania in Italy, in Pittsburgh and New Orleans in the USA, in Santo Domingo, and with the Welsh National Opera. She appeared in the 1977 CBC TV production of Madama Butterfly with Pierre Duval, Bernard Turgeon, Judith Forst, and a CBC orchestra conducted by Jean Deslauriers, and was Musetta in the 1980 production of La Bohème in Ottawa.
After her performance in the title role of Opera Hamilton's 1982 production of Madama Butterfly, Arthur Kaptainis wrote 'Chief among a strong and even cast was Maria Pellegrini... [who] waltzed through all the coquettish fan-fluttering motions with balletic ease. But her performance was still fresh and immediate, thanks to acting that conveyed innocence, an appearance that conveyed youth, and singing that was handsome and intense from beginning to end' (Toronto Globe and Mail, 18 Sep 1982).

楓葉紅於二月花 / The Maple Leafs of Canada 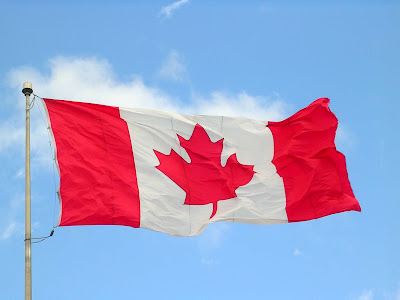 Many Chinese have fondly given Canada the nickname "Maple Leaf Nation" 楓葉國。Now before the Toronto Maple Leaf Hockey Club fans get too excited and think one-quarter of the world's population are behind their team, let me clarify.

The Chinese like maple syrup, enjoy the fall colour of a maple forest, and recognize the national flag of Canada, the 11-point Maple Leaf. But don't expect them to tell you when the team won the last Stanley Cup   Championship (the 1966-67 season) and the colour of the Toronto Maple Leafs, which is blue !!! 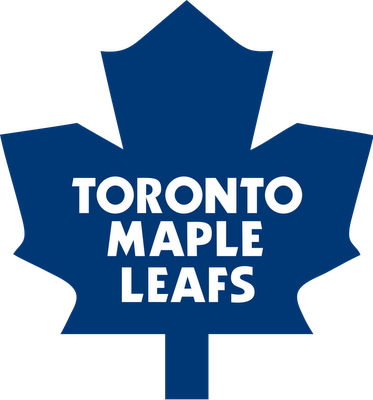 As you can see from the photo below, the colour of Canada's sugar maple leaves is usually green in the spring and summer, bright red or orange in the fall, and yellow and brown in the winter. 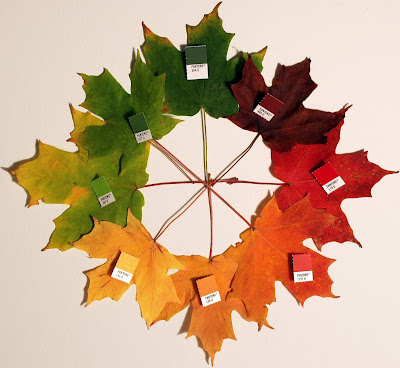 Each maple seed has two "blades" that twist like a helicopter as it is descending from the mother tree onto the ground below. 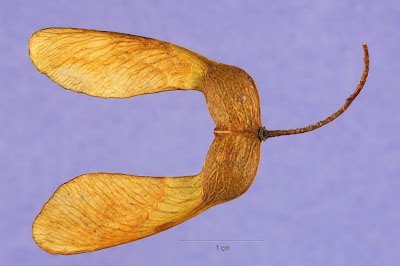 However, the leaves of many maple trees in the national capital region will not turn bright red this year due to a lack of precipitation earlier in the year. It is likely that the leaves will just turn yellow/brown and then drop off the trees.

Except this tree sitting in the front-lawn of my neighbour Mary. 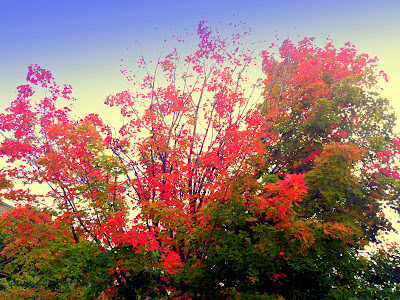 As you can see from the photo I took on Sept 22, the tree shows a bright red colour against the blue sky and all the fallen leaves are very orangey.

I asked Mary why her tree is so pretty. "Very simple," she said. "I have been watering it."

I am not complaining. She is paying the water-bill :O 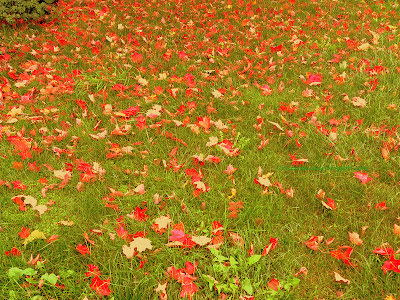 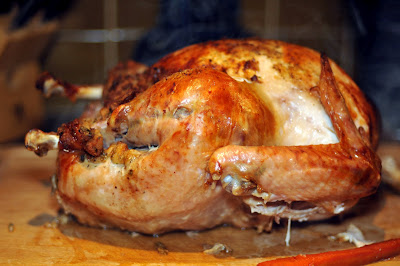 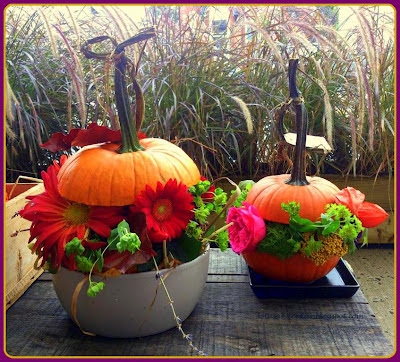 攝影图片:
橙色的感恩南瓜,趁上美艷的鮮花,真是非常应節啊!!!
Photo credit:   I took this picture of a pumpkin-floral arrangement at the Blumen Studio at 465 Parkdale Ave, Ottawa on Sept 22, 2012 (http://www.blumenstudio.ca/work/1).

Reference: 請參讀  Aging In Place
Posted by Haricot 微豆 at 23:59:00 2 comments: Links to this post