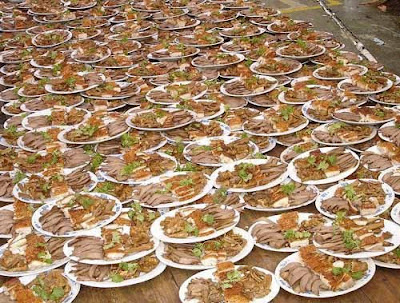 Recently, someone who had quite often attended meetings in China told me the following story:

Apparently, some restaurants have their meal-rates linked in direct proportion to the rental cost of the meeting/banquet rooms. So, when there are lots of guests, the room has to be big, and the cost of meal is inflated, regardless of whether the host wants that much food to eat or not (and never mind abt the quality). At the end of the event, it is most likely the host and foreign visitors will not ask for doggy-bags. The left-over food then becomes another "side-benefit" 下欄 for those working in the restaurant.

I told my friend: Well, at least the food is not wasted, even though the practice of charging the food-bill based on room-size sounds like a rip-off to me.

However, I can also see that the restaurants might be taking advantage of the Chinese tradition of "saving face". Let's face it (excuse my pun): Not an insignificant number of Tang people would go to great length and spend tonnes of money to show that they are "rich" and can "afford" to be wasteful. By having more food than anyone possibly can eat, they send the message of 有餘 and 家庭/國家富有 to their guests. But, as I mentioned in my comments to Fresh Designer: 如果上至官僚下至平民,個個要面子,樣樣講排場,咁就真係浪費金錢!!

It's abt time to ask: Isn't this so-called "face saving" practice a wasteful Chinese tradition?

Not to change topic but
have you seen "Saving Face"? A movie by Chinese Americans. I really enjoyed it.

衣錦還鄉...I hate this "Gold Mountain" thing. Last time I check, there is no freaking gold, just a bunch of problems like every where else, sigh...

There must be Chinese overseas who are still keeping this crap
alive . After all these years, can't we just be who we are.

Exile: I remember reading abt "Saving Face" the movie. It's abt a daughter, her girl friend/lover, and her pregnant mother who wanted to marry to a guy she did not love.

Here is the YouTube video clip of a youthful Neil Young, singing "Heart of Gold" live:

"I crossed the ocean for a heart of gold"

I love this line! No one sings like Neil Young.

Exile: Yes, he is quite a singer and song writer. I saw him at the New Orleans International Jazz Fest earlier this year. Same long hair, just older. And the crowd cheered.

I don't quite understand why people want to show off how rich they are by wasting food. In the past, you can't carry all your wealth with you, wasting food is a way to approximate how rich you are. Nowadays, you can just simply show other how many zeros in your bank statement if you want tell others you are rich.

Hevangel: Perhaps I do understand, but still I do not agree with the whole idea of showing off to start with, no matter how they do it.

Food is Shanghai is always floating in oil. Once a Shanghanese colleague told me that it's because in the past, oil was a luxurious good and people couldn't have much. So, to show they are now rich, they put in a lot in food. In restaurant, they want to show the food is worth your money, they put in a lot of oil.

Very strange culture. When I go to Shanghai, I never have Shanghanese food. I always go to western restaurants just to avoid the oil.

I can almost hear the same Shanghai people croak in their death beds:

>. .... 即使是整盤沒有人碰過的--通通都要丟棄
I thinks it must have something to do with the local restaurant regulations dealing with food and health issues .

>> .... 可以想像我們穿西裝著晚禮服，然後高雅的提著便當袋? 就算你跟我都做的到，不見得所有人都跟我們一樣。
True, I have never seen it happening in any formal business meetings !!!

Thanks for your input, much appreciated !!